Driving its victims to insanity and killing them

Torment his receiver until they relent and "spread the word", die, or kill them themselves (Succeed)

Smile Dog is the titular main antagonist of the Creepypasta story of the same name; "Smile Dog". He is a supernatural entity that takes the form of a demonic husky and forces people into spreading his image all over the internet, otherwise he will kill them.

Smile Dog (also known smile.jpg) is a supposedly "haunted" image dating back to the beginnings of the internet, smile.jpg has a reputation for driving those who view it insane, making its victims view it in their mind's eye at every turn. While it has been discovered that these images in victims' minds are the result of epileptic seizures, there is no clear understanding of why the image causes this. All the victims who spoke up about their experiences however, have said that they are also visited by the dog-like creature in the image, named "Smile Dog". When in these dreams, the only thing the victims can do is watch and listen as Smile Dog tells them that the only respite to their torment is to "spread the word", and many of them receive shortly thereafter a removable media via mail without a return address. Inside these media is said to be another copy or form of Smile Dog, which the victim is encouraged to spread to others.

Those who claim to have seen smile.jpg often joke that they were far too busy to save a copy of the picture to their hard drive. However, all alleged victims offer the same description of the photo: A dog-like creature (usually described as appearing similar to a Siberian husky), illuminated by the flash of the camera, sits in a dim room, the only background detail that is visible being a human hand extending from the darkness near the left side of the frame. The hand is empty, but is usually described as "beckoning". Of course, most attention is given to the dog (or dog-creature, as some victims are more certain than others about what they claim to have seen). The muzzle of the beast is reputedly split in a wide grin, revealing two rows of very white, very straight, very sharp, very human-looking teeth.

This is, of course, not a description given immediately after viewing the picture, but rather a recollection of the victims, who claim to have seen the picture endlessly repeated in their mind's eye during the time they are, in reality, having epileptic fits. These fits are reported to continue interminably, often while the victims sleep, resulting in very vivid and disturbing nightmares. These may be treated with medication, though in some cases it is more effective than others.

Smile Dog appears as a Siberian husky with grey and pink-like fur, accompanied by an inhuman smile. When he transforms into his demon form his fur turns red with a yellowish tint and black on the top of his head, his smile is far bigger.

Smile Dog is a merciless, sadistic, cruel, evil, satanic and manipulative sadist, taking advantage of his victim's fragile minds and breaking them while taunting them and telling them to spread his image across the internet, and possibly even the world. Smile Dog is surprisingly patient, he waits for his victims to give in to his demands and leaves them alone when they do, as he knows just what he's doing and takes pride in his job.

Smile Dog is able to cross over into dreams and turn them into nightmares where he's able to render the victim helpless, unable to speak, and tells them what he wants. He's also able to shape-shift into more of a demonic version of himself used primarily to terrify and force his victims into doing what he says. In some versions of the story he's able to cross over to the real world and murder the victim, dragging their souls down with him to Hell, which is believed to be his place of origin. 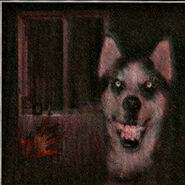