Taking care of the other Proxies

Proxy of the Slender Man

Rouge, her real name being Heather Marshall, is a Proxy of the Slender Man from the Creepypasta story Don't Look Up. Follow her journey through loss, self-harm, and escaping her twisted reality to the woods and becoming one of Slender Man's loyal Proxies.

She was slowly losing her humanity after a miscarriage which was then followed by the death of her fiancé in a car accident. As years went by, she ran away from home after they threaten her to take her to a mental asylum due to the fact she used to cut herself for fun; or, so they thought. Though, she just lost interest in everyone and became anti-social after the tragedy. She is currently living deep in the woods as Slender Man's loyal Proxy alongside with the other Proxies.

Rouge has pale ivory skin, long dark brown hair, and dark brown eyes. She is typically seen wearing a dull, dark red and tattered hoodie (with hood and sleeves rolled up), dirty beige cargo pants, a pair of clawed-gloves, suspenders, dark gray bandana embroidered with the Operator symbol that hangs around her neck, combat boots, and a white mask covered in dry blood and scratches with eerie features.

Rouge is the typical "motherly/older sisterly" type, she often acts very caringly towards other Proxies and views them as her own young since she never got the chance to be the mother she always wanted to be. She is completely obedient towards Slender Man and takes pride and joy in doing what she does because of her sadistic nature. While she won't attack strangers unless provoked, she is still a very aggressive individual. She is rarely, if ever, seen to show any remorse or guilt after killing someone. There are even times when she can be quite clever and witty, toying around with her victims before going in for the final blow.

Rouge is incredibly agile and fast, and she's able to display many kinds of different aerial maneuvers whilst climbing and hanging from trees (as if she were a skilled parkour runner or practitioner). Her method of killing is quite odd, certainly different from what the others normally would do. What she does is that she strikes from above, using her clawed-glove hands to climb trees, stalk her victim, and then finally jump down pinning them onto the ground before clawing at their face. 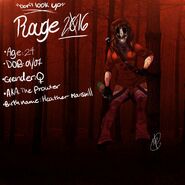