To show the world she is a good girl (On-going)

Meaning to Name: Due to her choice of weapons

Backstory: Izumi Fujiwara was the only child of Itsuki and Yuuna who was born in Okinawa, Japan. Both of her parents were Japanese-American Marines stationed in Okinawa for their respective jobs. Despite being in a military family, her parents would teach her to always be a proper lady and to be a good girl.

Her parents didn’t want her to enter military life because they wanted a prim and proper little daughter, so they only taught her basic military self-defense. They began to manipulate her, stating that a proper little girl would have no negative emotions nor would she be dumb. Therefore, Izumi studied and made sure she would be on top of her classes.

According to them, she had to be a smart, happy, and proper little girl for them. Throughout her school years, she would never get lower than an A+ because according to herself, she was a good girl. Whenever she would feel sad, angry, disappointed, or anything else than happy, she would imagine her parents yelling at her to be a proper lady.

Her parents were enforcing the mentality of being a smart proper little girl. When having negative emotions, she would push it down and fake her own emotions for the satisfaction of her own parents. To satisfy her own parents, she had enrolled in ballet. Ballet was a graceful and feminine dance for her to join, and her parents supported it.

However, her mother Yuuna became obsessed with the idea of her perfect little girl being a ballet dancer, so she enforced Izumi to train harder. Izumi would train for days and days perfecting each mistake she made according to her mother.

Izumi practiced to the brink of death because she wanted to satisfy her own parents. She needed to show her parents that she can become a prim proper ladylike they wanted her to be. Due to training herself to the brink of death, she began to suffer the consequences. Izumi began to suffer from eating disorders like Bulimia, and Anorexia. Since she was suffering from the two eating disorders, she had become anemic, which took a toll on her body. Her skin began to turn white due to the skin condition pallor and her hair began to fall out. To hide her unladylike appearance, she began to wear wigs to hide her balding head.

Yuuna her mother would always compliment how beautiful her hair was, and how pale her skin is. Izumi wanted her to know the truth, but it was worthless because she didn’t want to destroy the fantasy they had for her. During ballet classes, she would suffer from nosebleeds, fainting, and minor internal bleeding. Not only was she suffering in her ballet classes but since she was enrolled in Tohoku University, she constantly pushed herself.

Tohoku University was the best university Japan had to offer, but their grading system was strict, causing Izumi to push herself over her limit. When she began to practice for an upcoming ballet performance, she began to neglect her studies for her classes, which was a mistake that cost her everything. One day, when she entered her class she realized there was an exam which she did not study for.

Knowing she didn’t study for the exam, she knew she was going to fail. Skipping the exam would cause her grades to drop, so she did the exam. For nights, she would continue to think about the exam and which score she got. This made her begin to scratch her skin and bite her fingers.

She tried her best to stop this form of self-harm because she knew if her parents found out, they would yell at her to be a proper lady. A week later, she was in her ballet studio practicing with her friends, until she saw her mom walk into the studio fuming with anger as she held a paper. Izumi walked up to her, and saw her exam score was an A-.

Her mother began to scream at her for being a bad girl and for getting a bad grade in the exam. Izumi tried her best to explain she was too busy with ballet, but her mother dismissed her. Her emotions began to swirl around, and she tried her best to handle her emotions. Her mother left her behind as her tears spilled onto the floor. Izumi picked up her items and walked back home with shame in her name.

When she entered the house, her parents began to yell at her for having a bad grade and that a proper lady wouldn’t have that type of grade. Izumi snapped at them for having high expectations of her, but it landed to her getting slapped across the face by her father. Izumi dropped her stuff and ran to the shed with tears streaming away. 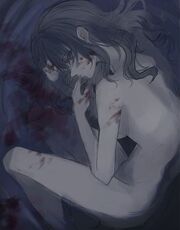 So many negative emotions were swirling…the emotions her parents told her not to have. Bursting the door open, she grabbed a garden knife and began to cut her wrist open. Each thrush was harder than the other one, and she began to scream. She just wanted her parents to be proud of her. Her punishment was deserved because she had been a bad girl. Izumi continued to cut on her wrist until her mother found her cutting down to her wrist bone.

The pain kept her feeling safe and happy. She felt emotionally numb, but now she was physically numb. Her mother took the knife away, and they sent her off to the hospital. When she was in the hospital, she was under strict suicide watch for two weeks, and in the hospital, her emotions were wrecked. Dazed out for most of the days as she muttered she was a good girl.

She deserved to hurt herself to show her parents she is a good girl. Izumi began to remember the blood pouring out of her wrist, making her feel happier because the pain reminded her that she was a good girl to hurt herself. When she came back from the hospital, she was no longer their precious little girl. She was a different daughter for them now.

The pain was what kept her alive, and when she tried to explain to her parents she was still their little girl, they dismissed her. Her mind snapped with emotions warping inside her. Walking down the shed, she pulled out a sharp item and walked back to her house.

Relationship/Partner: Rabbit Stalker is her operator for the group The Prowlers. He is of tall build, with brown hair mainly wearing his rabbit mask. In her eyes, Rabbit Stalker and her are dating and she believes one day he'll propose to her. However, they are not in fact dating, and he allows it because he's afraid she'll leave the group if he doesn't accept her.