Photo-Negative Mickey is the titular antagonist for the infamous Creepypasta known as "Abandoned by Disney". He is supposedly an unknown human/humanoid trapped within one of the rotting costumes of Treasure Island, more specifically Mowgli’s Palace. Either this or - in some people's assumptions - he is supposed to be one of the original Mickey Mouse mascot suits, somehow gaining sentience to understand the lack of care/awareness Disney had for his existence.

Photo-Negative Mickey is a version of Disney's Mickey Mouse but with an inverted colour-scheme (white fur, black skin patches and blue-shaded clothing). Also, his eyes are hollowed out with white pupils.

When attempting to remove his head, thickened, yellow blood spills out from the suit, indicating that whatever was/is inside has began to rot away due to the conditions of the place. Whether or not there is a person inside the suit isn't known.

Despite the frightful introduction to the character, he bears no actual threat to the protagonist whilst he embarks on his adventures in the abandoned Disney project. He merely is a forgotten member of the franchise left to decay in the costume area of the island. In fact, Photo-Negative Mickey seems relatively friendly in a morbid sense when a newcomer arrives to the location.

Away from that, it could be said he bears resentment for his abandonment by Disney themselves as the sign change might be his doing. And - if the character misinterpreted the protagonist's role/motive - he could have lashed out violently against them and others.

Photo-Negative Mickey appeared on the Creepypasta Abandoned by Disney where an explorer has an terrifying encounter with the Mickey costume. Upon the explorer searching around the abandoned amusement park, he discovers a sign above a ruined studio reading "Abandoned by Disney", a skull within a Donald-Duck head before finding the Mickey-Mouse suit laying on the floor. After taking a few photos of the suit, it stood on its feet to ask the question...

It then began to physically tear off its own head where the rotting, yellowish liquid leaked from the suit itself. The protagonist, now both disgusted and terrified for his life, ran away from the suit which surprisingly had not followed him. As he escapes the studio and the amusement park, he viewed the sign once more for it to read...

An image of the original download to the spinoff game. 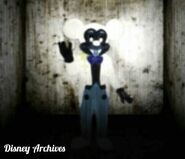 The associated image with the Creepypasta taken by the photographer
Community content is available under CC-BY-SA unless otherwise noted.
Advertisement