Kill Everyone Who Crosses Her Path

Psychotic Nurse
Ann Lusen Mia or more commonly known as The Nurse Ann is a character whose origin remains shrouded in mysteries. She is primarily known to be an undead killer nurse, and could be considered as one of the most recognizable female Creepypasta characters.

Nurse Ann does not have an official origin story, so her backstory is currently unknown.

Ann is a young woman in her 20s, she stands at 5'7" tall and has red hair that falls just above her shoulders. She has a lean but feminine physique. Her skin is grey, and she has many stitches on her body, neck and jaw. Her left eye is deep red while her right one is missing, and she has dark rings under her eyes. She keeps the empty eye-socket covered with her hair.

Her main attire is an unpractical black leather nurse uniform that reaches her upper thighs, as well as matching black leather gloves, and black shoes. Furthermore, she wears a medical mask along with a nurse hat that both exhibit a bright red plus sign along with her dress.

In an artwork titled, The Life and Death, Ann is shown to have tangerine-colored hair tied back in a braid, and her skin is a light shade of cream. Her uniform is white instead of black, and she is also seen wearing rectangle-shaped glasses. In this, we can confirm that Ann used to be human.

Ann's personality is not described in detail and so very little is known about her. The only information that can be noted is that before becoming psychotic and a murderer, she was once a shy and caring nurse in her past human life. But after becoming what she is now, she is instead an aggressive, selfish, mad nurse and is completely different from her previous self.

In a comic created by DeluCat on DeviantART, Judge Angels is exploring a hospital where she planned to rest in when Nurse Ann attacked her after Ann was awaked by Judge Angels' entrance. Judge Angels easily sliced Nurse Ann's head off after Nurse Ann only managed to injure Judge Angel's arm. Judge Angel was about to leave not realizing Ann was already undead. Nurse Ann got up and placed her head back on before grabbing her chainsaw again and continuing to attack Judge Angels.

The comic has not been continued from the last page made in 2014, but the last three pages had Nurse Ann saying, "RUN LITTLE RABBIT", and "RABBIT". And on the last day before the comic had stopped updating the last thing that was displayed was Judge Angels fleeing the scene and Ann saying, "Running?"

In one scene before the fight, a shadow-like figure that resembled the Nurse Ann stood outside the window watching Judge Angels as she conversed with Bloody Painter, and the shadowy figure of Ann just spoke, "Found you, rabbit". 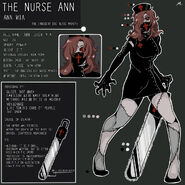