Demon of the Seventh Hell

The Test of the Seven Kings

Torturing the souls of humans

Take everyone on earth with her to hell, so they will all suffer for eternity (Ongoing)

Mad Angel Rosemary, whose birth name is Rosemary Candler, resides in hell's depths, in the seventh hell to be precise, waiting and slaughtering human souls for points and to reach Lucifer in the eighth hell. Once she lived with us in the human world, but her last day finally came. A very violent and unjust murder led to her being sent to the afterlife, where she became what she is today.

Sometimes she ascends from hell to heaven on earth and then descends to the surface with humans. She likes to play with her victims before torturing them, and in this case she prefers it when she seduces them into her charm. Many men fall for her, but women can also fall prey to her.

Rosemary appears to be a young woman at approximately 21-years-old. She has a very pale complexion and long, blonde hair, as well as striking green eyes. Since she never wears anything covering her torso, her breasts are exposed, which are only hidden by two braided strands of hair, in addition to the necklace of seven red stones she always wears. From her waist down, she wears trousers made from the fur of a polar bear. Chains adorn both her arms and her neck. A pair of huge angel wings glistens on her back, with each feather emitting a brilliant beam of light.

Rosemary appears almost identical to her more ordinary and beautiful form, except that her entire body is charred. She keeps her wings, chains, necklace of seven red stones, and polar bear skin on her legs. There is no longer any incredible and beautiful golden hair, and her entire body has turned to a blood-red and black mass with a rocky and rough texture, resembling severe burns and joined to the volcanic magma to the point of being deformed.

Rosemary is a being purely filled with hatred and madness, her name says it all. She carries an anger that is a consequence of her unfair and painful arrival as a fallen angel, a feeling that she thinks can only be alleviated by torturing the souls of humans. In order to mask her anger and frustration, she transforms into the angelic and beautiful form she had before she died. This allows her to act cheerfully and sweetly, and to remain calm. After being transported to hell, it was assumed she was completely devoid of emotion and desire, but it has already been proven that there are still human emotions in her.

A young nurse and the cause of Rosemary's death.

Rosemary was born and raised as a normal girl, and although she tried to follow what she thought was right, she nonetheless had prejudices and sins, like everyone else. She had an accident at the age of 21 that damaged her legs. While in the hospital, she met Victor, the doctor she was assigned, a young man who secretly formed an intimate relationship with her. Anabelle, a nurse and former lover of Victor, was infuriated by this relationship. When Rosemary was sleeping in her room, Anabelle decided to inject the girl with poison while no one was around to notice her. Following this, Rosemary was taken to purgatory, where she had a choice of going to heaven, or going to hell. Ultimately, Rosemary decided to go to heaven, but to do so, she had to pass some mysterious tests. Those tests were referred to as "The Test of the Seven Kings," which aimed to remove all the sin from the soul of a being in order to transform it into a "perfect soul".

As each year brought a new test, Rosemary resisted until the end for seven years before overcoming it and becoming a fallen angel. The girl and a few of the billions of other people who entered the door managed to cross to heaven, only to fall to hell, realizing that in reality there was no such thing as heaven, and that everyone, regardless of their performance in their lives, would end up in hell after death. During the course of reaching hell, she plunged into a gigantic ocean of volcanic magma, whence she emerged with a burned and deformed body. There, she realized that she would spend the rest of eternity in the underworld, and the Test of the Seven Kings was nothing more than a way to determine her classification in the world of the dead. Out of nine hells out there, she made it to the seventh one. The sight of her horrible body, seeing her new life, the suffering she had to endure to get to what she believed to be a promised break, and then learning she was killed so early and unjustifiably filled her with anger, so she decided to go to the human world, to the hospital where she had spent her last moments. Seven years had passed in purgatory, but in real life only seven months had passed, and on the night she arrived at the hospital she saw her former lover Victor and the evil nurse Anabelle kissing passionately in a corner of the hospital. After watching this, Rosemary became angry, and decided to kill them, after torturing them as an act of revenge. 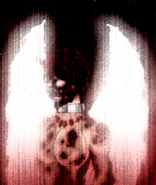