Kill when she feels like it while living a relatively normal life, killing abusers and exceptionally evil creatures

Katherine "Kate" Evelyn Knight, better known by her callsign Killing Kate, is the eponymous protagonist of the Killing Kate comic strips by Jcmix-Doodles. She is a young woman who had an abusive relationship with her father, who one day murdered her mother and attempted to kill her and her brother Mike. Despite being slashed across the throat, Kate brutally killed him in turn and burnt their house down. Put into a dysfunctional orphanage, Kate was bullied by the worst occupants. When it reached an apex, she murdered her tormentors in rage while those who showed her kindness fled. With no family or home, a preteen Kate was eventually found by Slender Man and taken in by him. She eventually befriended his fellows like Jeff the Killer and Eyeless Jack, becoming supernaturally altered as they are and becoming a serial killer in kind. Unlike her peers, Kate these days does not victimize innocent people, rather targeting abusers and bullies like her late father, making her a rather self-absorbed, no-less deranged antiheroine. She currently has a boyfriend named Mark Reed, himself a homicidal kitsune.

Her father was a short temper drunk and one day, he killed Kate's mother and cut the side of the kate neck, he tried to kill her and her younger brother Mike at the time and she kills her dad and burnt the house down. So they went to an orphanage with her older sis Victoria that never knew what really happens until one day Kate told her what actually happened and Victoria feared her. A friend that never really liked Kate as much and was able to convince the whole orphanage to beat her to death before she kills them and they did including her sister, Kate's long her hair was cut and had cuts everywhere and one cut her forearm that says "monster" and the owner of the orphanage call the cop and her and her 5-year-old brother was running form the cop and her 5- year-old was shot. And she got shot on the side of her neck again that why it's all ugly.

Prior to her father's snap and murder of her family and her supernatural alteration, Kate was simply a half-white, half-Hispanic teenager with straight brown hair and eyes.

Following her descent into insanity after her father destroyed their family, she dyes the tips of her brown hair red, claiming she uses blood. Her eyes now seem to bleed, she also has bandages around her neck. Kate wears a shoulderless top with red and black striped sleeves, and she also wears dark gray pants with rips on them. In her older years, Kate's appearance varies, as does her outfits. Most consistently, she grows her hair out far longer and curls it, still keeping blood in it for highlights. She also takes to wearing black eyeliner and lipstick. She eventually gets tribal tattoos on her right shoulder, and a silver nose ring (which she admits she did while wasted). She matured physically very drastically, while in her teens she was short, mousy, lanky, and generally undeveloped, she since has grown into a tall, attractive, slender, voluptuous figure in her 20s, which she eagerly and enjoyably takes full advantage of.

Before her father's decline and murder of her family, Kate was said to actually be very timid and introverted, seldom smiling, and was said to be polite. Perhaps as a result of the trauma her abusive father inflicted on her, she developed an immense, homicidal hatred of abusive fathers. One word to describe Kate nowadays would be...bipolar. She is normally very sarcastic and mischievous, but cute and funny when in a good mood. However, if sufficiently enraged, or seeing someone aside from her belittle or bully someone, she will instantly murder that person. She is also immensely foul-mouthed, happily and eagerly dropping "bitch" and "fuck" pretty much in every breath. She is very rude half the time, making fun of her friends or people that get on her nerves. When in a good mood, she is very loud and energetic, . The one person she loves unconditionally is her homicidal kitsune boyfriend Mark, them both being equally foul-mouthed sociopathic douchebags. However, in her older years, Kate is more subdued and extravagant, acting more feminine and actually caring for beauty maintenance, changing her looks. However, none of this has diminished her gleeful rudeness, mischievousness, vulgarity, or bloodlust. She also has become more lustful, using her sex appeal to tease guys she finds cute, in addition to Mark.

Comics that Include Killing Kate 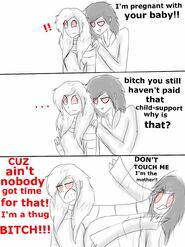 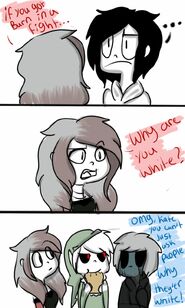 Why is Thug Jeff White? 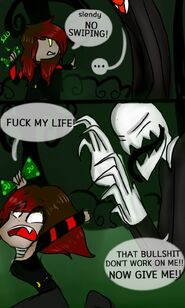