Chris is Nina the Killer's younger brother who was killed by Jeff.

Play football//Play with his friends

Find Nina and get revenge with Jeff

Well, I and my parents had gone to a campsite to rest a bit, it was already getting dark when I heard a noise in the bushes, my parents and my sister were sleeping so I didn't decide to wake them, I walked a bit around the campsite when I heard the noise again, I looked to see what it was, ah it was the bushes noises, I was paralyzed when I saw what it was, it was Jeff the Killer, I couldn't believe it was him, the famous serial killer that everyone was looking for?! I couldn't move, he jumped on me, after some seconds I could finally move, he was on top of me with his knife, I felt a big pain in my stomach, he had just stuck the knife in, the last thing I saw was him going towards my parents and my sister's tent.

Chris has hazelnut brown hair, has light blue eyes, and is wearing a green shirt stained with blood, he wears a pair of denim shorts a bit cut off. The skin on his fingertips and feet has blood on it. He has a cut on his neck which has blood pouring out.

He is sometimes quiet and gets uncomfortable when many people ask him questions. He has sometimes a rather depressive personality. And sometimes he's quite restless. He gets quite angry when people speak ill of the people he adores. Chris is quite sensitive, normally he can be quite rude at times. 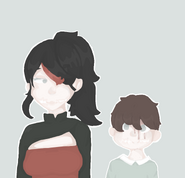